The opening weekend of the season is here. We return to action in the Sky Bet Championship tomorrow with a trip to St Andrew's to take on Birmingham City. Blues have a new man in charge and plenty of fresh faces in the squad. Check out our big match preview below.

Birmingham City dropped like a stone in the final weeks of last season, following the announcement that Pep Clotet would be leaving, but there's plenty of optimism amongst the Blues faithful that a better season can be expected this time round.

Much of that centres on the appointment of Aitor Karanka as the Club's new Head Coach coupled with the addition of seven new players over the summer. George Friend, Jonathan Leko, Jon Toral, Adam Clayton, Andres, Ivan Sanchez, and Neil Etheridge have all come in the door at St Andrew's in the past month.

Jude Bellingham's July departure to Borussia Dortmund was their major piece of outgoing business, the attacker leaving as the world's most expensive 17-year-old in July. Scott Hogan, who netted seven times in 17 games, returned to Aston Villa at the end of his loan spell with Birmingham still hoping to persuade him to cross the second city again this campaign.

After three years as assistant manager to Jose Mourinho at Real Madrid, Aitor Karanka was appointed manager of Middlesbrough in November 2013. He was the first non-British man in charge at The Riverside in their history.

He earned promotion with them in 2016 but he was sacked less than a year later with The Teesiders three points from Premier League safety and without a win in three months. After nine months out of the game he was appointed Forest manager in January 2018.

He lasted just a year at The City Ground, leaving the Club seventh in the second tier when he departed. Following an 18-month break from football, Karanka replaced Pep Clotet in July, his third Championship job.

The 42-year-old played as a defender for Athletic Bilbao, Real Madrid and Colorado Rapids before pursuing a career in management. Capped once by Spain, he also represented his country at youth level alongside the likes of Fernando Morientes and Raúl.

Mads Roerslev will be absent due to a foot injury while David Raya has missed the last three matches with a knock.

For Birmingham, Lukas Jutkiewicz has recovered sufficiently from a quad injury to be involved tomorrow, although Karanka admits he won't be able to play 90 minutes; 18-year-old Adam George will deputise for him at some stage. Gary Gardner is likely to miss out but Jeremie Bela will be available following a shoulder issue.

⚖ Tony Harrington will be the man in charge tomorrow

Tomorrow's game is only available to watch via Sky Sports. For more information click here.

Mark Burridge will be live on iFollow with Mick Cabble bringing commentary from St Andrew's. Click here to subscribe.

Next Up: Birmingham City

Brentford’s 2020/21 Sky Bet Championship season began as the 2019/20 version did, with defeat to Birmingham City. Last year the game was settled by a solitary goal at Griffin Park and this time there was an away loss for The Bees with Jérémie Bela getting the only goal. That came late in the first half and was enough to settle the contest.

The defeat was harsh on a Brentford team that had the better of the chances and hit the woodwork twice. But the chances were either squandered or kept out by debutant goalkeeper Zach Jeacock and Birmingham made the most of it. They started well and did enough to lead and when they got in front, they held on to the lead with a mixture of good fortune and good defending.

The home side made a fast and aggressive start to the game. They were quicker to the ball in the midfield at the very start of the contest, they picked up the loose balls and started on the front foot. Mathias Jensen was robbed early on with a firm challenge, one that one the ball but left him injured and he had to be withdrawn inside the first ten minutes. When Sergi Canós was robbed soon after by George Friend, the ball was worked to Bela and his shot was pushed away low down by Luke Daniels.

Iván Sánchez fired over the bar and Jon Toral had a shot blocked as Birmingham had the better of the opening exchanges. They looked to get men forward and kept their wingers high up the pitch and close to the touchlines. They backed their holding midfield players – Ivan Šunjić and Adam Clayton – to give them a platform to play and wanted to make Brentford defend.

The Bees were forced to spend a lot of time inside their penalty area in the first half hour. Pontus Jansson was forced in to a block inside his own six-yard box when Lukas Jutkiewicz nodded a long ball in to the path of Jon Toral. Toral also had a shot blocked and a Kristian Pedersen header from a corner may have bounced in but for the intervention of Ivan Toney just in front of his goal line.

But The Bees were able to use Birmingham’s positivity against them at times. When Josh Dasilva was able to get the ball at his feet there was space for him to move in to as he was too quick and powerful for Clayton. Birmingham were mostly disciplined out of possession, but Brentford created good openings when they turned the ball over quickly and came closest to scoring in the first quarter of the contest.

Toney sting the palms of Jeacock with an early shot from the inside left channel after good work by Emiliano Marcondes, the early replacement for Jensen. Canós then got up a head of steam on the left and skipped away from Maxime Colin and then a challenge from Harlee Dean that would have caused serious damage if it connected. The ball in to the box fell to Marcondes and then Bryan Mbeumo but Jeacock saved and Brentford could not force the loose ball home.

Colin made a vital defensive intervention to prevent Canós heading in a Henrik Dalsgaard cross before Dasilva burst through the midfield and hit a shot that beat Jeacock but hit the post. The ball fell fortunately for the home side and they hacked the ball clear. The best chance for Brentford in the first half fell to Mbeumo. He had done brilliantly in the build-up to release Dalsgaard on the right, when the cross came in, Dean took it away from Toney but it dropped to Mbeumo 15 yards out. The goal was at his mercy, but he smashed it over the bar.

And that proved to be a vital moment as Birmingham went ahead four minutes later. They won a corner on the right, Sánchez delivered it with his left foot and Bela snuck in at the near post to flick a header in. It was a well-executed set piece, the ball was drilled low, Bela reacted, and his header was inch perfect, giving Daniels no chance.

The game was fairly even at that point and Birmingham would feel they had done enough to lead. Jutkiewicz was a superb outlet for the home side, winning the ball for them in Brentford territory, Toral was playing very close to him and feeding his wide players. The Bees were doing as much defending as attacking and their midfield players were only influential in patches.

They pushed on towards the end of the first half without creating a clear-cut chance. Toney and Canós had shots blocked and from the second of those, Brentford pinned Birmingham in. Christian Nørgaard won the ball in midfield and chased it as it bounced up in the penalty area, Dean made another very firm challenge, got his head to the ball but followed through and took the Brentford man out. Nørgaard was able to play on after some treatment and referee Tony Harrington decided no offence had been committed.

Birmingham went in ahead at the interval and had a chance to make it two just before with a free kick a few feet outside the penalty area. Jutkiewicz lashed it in to a defensive wall and then fired the loose ball over the bar. The home side also had a couple of chances just after the break. Dean headed a Colin cross wide, albeit with a ricochet off Ethan Pinnock, and Daniels saved from Jutkiewicz when Birmingham broke from midfield.

But The Bees were improved in the second period. There was more rotation in midfield and Birmingham were forced to chase the ball more. The Bees were not perfect in possession but when they got the ball moving quickly in the Birmingham half, they looked dangerous. They also posed a threat from set pieces and one midway through the half was only defended with Pedersen hauling down Jansson, but Mr Harrington again failed to see a foul.

Rico Henry created a good chance for Canós when he worked his way in to the penalty area on the left, but the shot was blocked. A chipped free kick was then headed in to the centre by Pinnock, Toney failed to connect but Canós got an overhead effort away that looped over Jeacock and hit the crossbar. But Brentford were starting to push the home side back. The game was being played almost exclusively in Birmingham territory and chances were coming.

A Canós cross almost set up an equaliser when Pedersen inexplicably headed it across his own penalty area. Marcondes got there and his header was well saved by Jeacock. The ball bounced around but neither Marcondes nor Toney could force it in. A Dasilva pass then opened up Birmingham and put Mbeumo in behind, his shot was placed across Jeacock and was inches off target, curving just past the far post.

Brentford’s momentum was halted a little by a series of substitutions, and also by fouls as Birmingham started to collect cautions. But the game was still being played in Birmingham territory and Jansson had a great chance to equalise when a corner from Nørgaard found him arriving inside the penalty area, he headed down, but the ball bounced up and over the crossbar. And that was Brentford’s last chance gone and they began the new season with a loss.

Next Up: Birmingham City 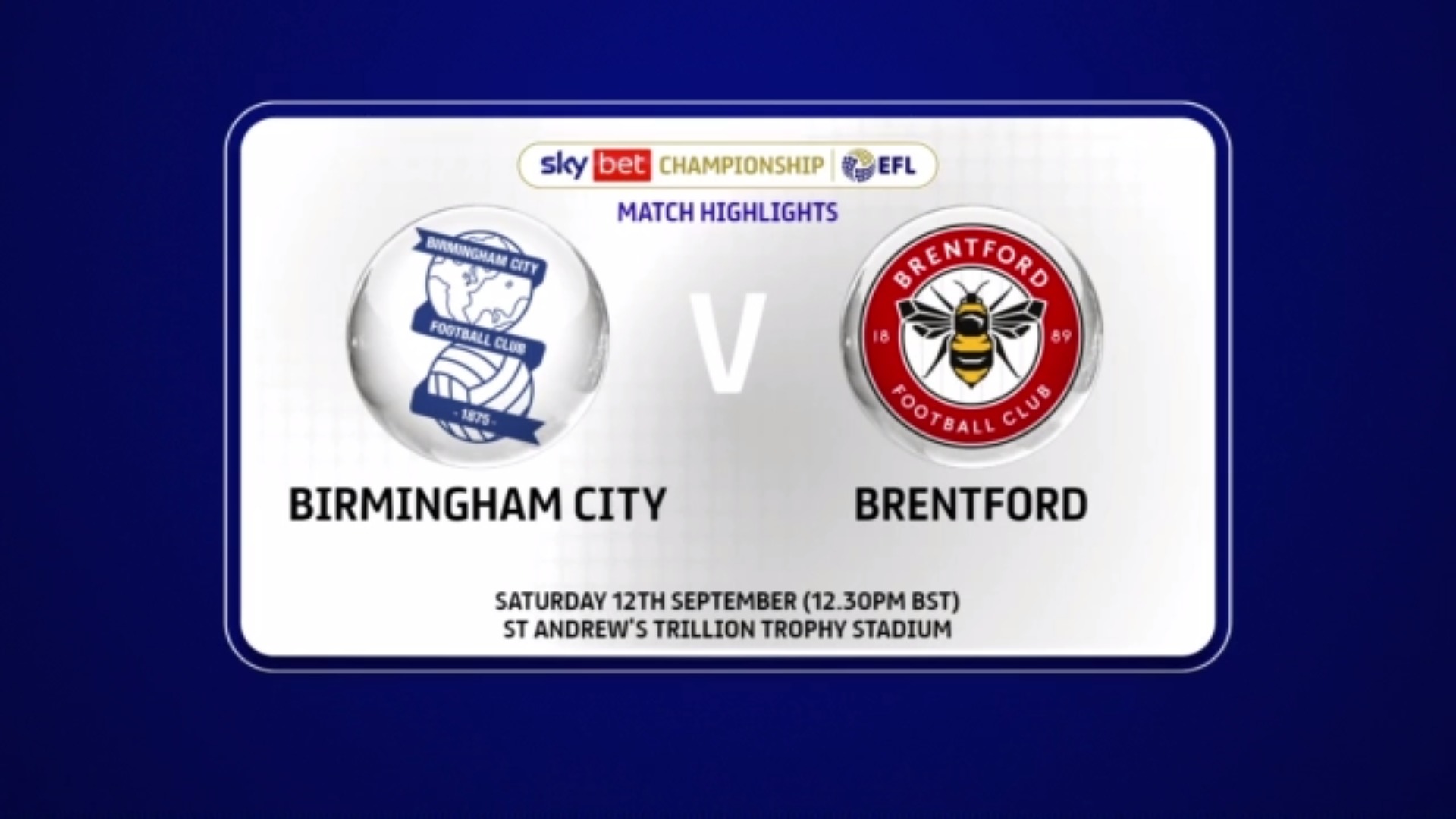 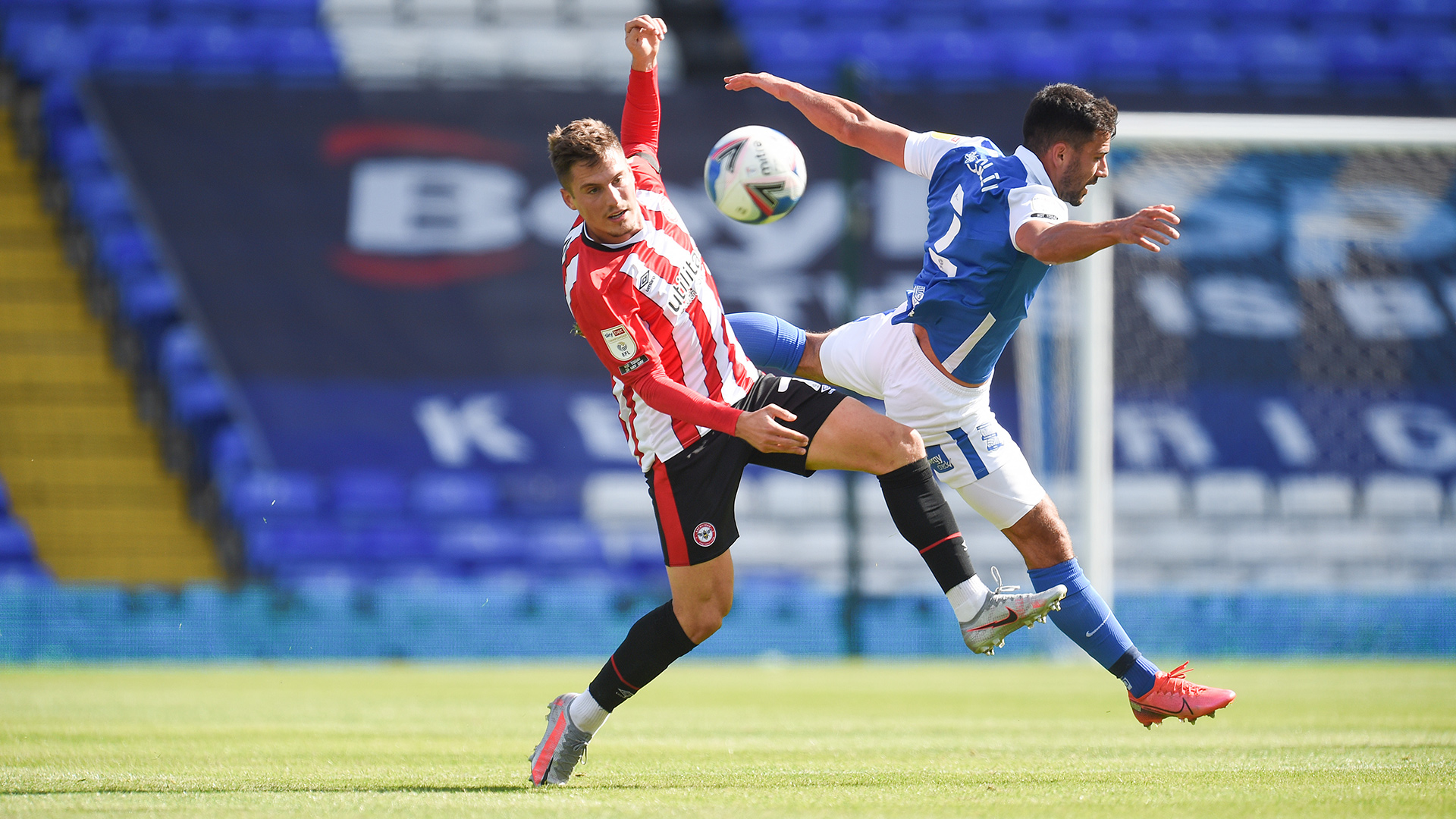