Our final regular season home game of the campaign sees us welcome Watford to TW8 tomorrow afternoon. The Hornets wrapped up promotion back to the top flight last Saturday while we are looking to secure third place with victory and stretch our unbeaten run to 11 games. All the details ahead of the match can be found below.

Watford returned to the Sky Bet Championship this season for a good time not a long time, achieving promotion back to the top flight at the first attempt under Xisco Muñoz.

For much of the campaign it looked like the Play-Offs would be most likely for The Hornets, that was until a quite incredible run of form which began back in February.

Starting with a 6-0 demolition of Bristol City on 13 February, Watford went on to take 40 points from the next 48 available, culminating in last Saturday's promotion celebrations following their 1-0 victory at home to Millwall.

That win was their 18th on home soil this campaign, five more than anyone else in the second tier. Since our draw there back in mid-December, Queens Park Rangers have been the only side to take points off Xisco's men at Vicarage Road.

The defensive framework installed by Vladimir Ivić before Christmas is still evident. Watford have conceded just 28 goals this term and could break the Championship record for goals conceded in a season if they let in fewer than two between now and the end of the campaign.

Ismaila Sarr (13) and Joao Pedro (9) have been their main goalscoring threats with Philip Zinckernagel chipping in with one goal and five assists since joining in January.

Tomorrow's game will come too soon for Tom Dele-Bashiru (knee) and Troy Deeney (achilles) while Kiko Femenia (abductor) won't play again this season. Isaac Success has returned to training after missing the Millwall match with a knock picked up ahead of the game.

A gifted left-winger, Francisco Javier Muñoz Llompart, to give him his full title, made just shy of 450 competitive appearances during a 16-year playing career in Spain and Georgia.

He won La Liga, the UEFA Cup, and the UEFA Super Cup with Valencia in 2003/04 before a trophy-laden end to his career with Dinamo Tbilisi. He was the Erovnuli Liga top scorer in 2012/13 and 2013/14, Tbilisi doing the league and cup double in both years, and was voted the league's Player of the Year in 2014.

Xisco then returned to Spain to finish his career with third tier side Gimnàstic de Tarragona. After retiring in 2016, Xisco joined Vicente Moreno's coaching staff at Gimnàstic before returning to Dinamo, this time as a coach in January 2019. It was a short but successful year-long stay as Dinamo won another league title. However, just six month's later he was back as Head Coach, a role he gave up in December 2020 to join Watford.

⚖ Lee Mason will be the man in charge tomorrow

🆚 The Watford Observer's Ryan Gray on The Hornets

This weekend, we will be joining the rest of football in a boycott of our social media channels to say that Enough is Enough and more must be done to tackle online abuse. That means the only coverage of our visit from Watford will be on iFollow Brentford.

Season Ticket Holders and Premium Seat Members have VIP access while match passes are also on sale for £10 (£7 international fans).

Two second half goals enabled Brentford to record a third straight win, with Watford beaten in West London. Marcus Forss put The Bees in front before Ivan Toney converted his penalty to reach a personal landmark. Toney’s spot kick was his 30th goal of the season and equalled the most scored in a second tier season since it was renamed as the Championship in 2004. And that was enough to give Brentford a 2-0 win, their first victory against Watford since 1977.

It was three points that Brentford fully deserved. They had the better of the first half without finding a way through and scored within 60 seconds of the restart. Forss’ goal was followed by Toney’s soon after and there was no way back for Watford. The visitors have already secured promotion to the Premier League and Brentford’s win ensures they will finish third in the Championship whatever happens in the final game of the season, at Bristol City next week.

Watford started brightly and created two big chances in the first 11 minutes. A Tom Cleverley free kick was met by Craig Cathcart unmarked ten yards out, but he headed wide. A good run down the right by Joseph Hungbo then opened Brentford up, his got a pass off to Dan Gosling, the shot was low from 15 yards, but David Raya got down to push it away.

The visitors would have felt they should have been ahead at that point, but the game was pretty even, and it was Brentford that started to take control. Mads Bidstrup dictated play at the base of the Brentford midfield and The Bees looked to attack, getting men in to Watford territory. Mads Roerslev and Sergi Canós provided width from wing back and Brentford’s attacking approach won them dangerous set pieces and created chances.

A free kick was played short for Canós to cross from the left, Mads Bech Sørensen headed across but Watford defender Francisco Sierralta rose highest to clear off the line and prevent a Brentford man heading in. Toney got to the loose ball, but his header was blocked and Canós then blasted wide. Christian Nørgaard met another free kick soon after, on the volley at the far post, but fired it just over the crossbar.

While both teams knew their fate before kick-off, the game was competitive and entertaining. There was a desire to attack from both sides, with spaces in the midfield and forwards running at defenders. Watford’s rhythm was affected by the early loss of both Hungbo and Tom Cleverley and it was Brentford in control of the game. Mathias Jensen and Tariqe Fosu, protected by Bidstrup in behind, were able to play on the front foot and most of the game was taking place in Watford territory.

Toney got away down the right and cut the ball back for Jensen, but his shot was blocked by Gosling. Toney then met a Forss cross with a powerful header, but was denied by Daniel Bachmann, and Fosu had a shot blocked when Pontus Jansson nodded a corner down. The Bees had the ball in the net just past the half hour when Jansson again met a corner and Forss back heeled the ball over the line from close range. But he was in an offside position when Jansson headed down and the goal was ruled out.

That was the closest either team came to a first half goal. The Bees had the initiative at the break but had been unable to find the break through. They did not, however, have to wait long after the restart. Within a minute of the resumption, Bidstrup picked up a loose ball and got Brentford moving. Fosu ran down the left and played in Canós, bursting up from left wing back, the ball was drilled across and Forss arrived to fire in at the far post. Brentford had cut Watford open, and the right final pass gave Forss the time to pick his spot.

Isaac Success had a shot blocked as Watford tried to respond, but Brentford had the upper hand. The Bees had more intensity on and off the ball and continued to play on the front foot. Forss had a long range shot that flew wide before Toney’s landmark moment came on the hour.

Canós started it off with a run across the pitch and he fed Jensen on the right. Fosu fed the cross down to Toney and he tried to create room to shoot, he was tripped by Sierralta. Referee Lee Mason pointed to the spot and Toney stepped up. Bachmann waited for Toney to pick his spot and dived full stretch to his left, but he could not get there. The ball nestled in the corner, Brentford had two and Toney had 30.

Jensen ripped a shot past Bachmann moments later after he got on to a Toney lay off, but the goal was ruled out for offside earlier in the move. Canós also faded a cross-cum-shot just past the far post and had an effort blocked as Brentford looked for the third goal. Nørgaard headed a Jensen corner wide when well-placed later in the half.

Watford responded well to Brentford’s second goal and went looking for a way back in to the game. Raya saved a Ken Sema free kick before Philip Zinckernagel fired over the bar. A pass from Cathcart released Andre Gray in behind the Brentford defence, but his touch was heavy, the ball ran away from him and out of play. Gray had been able to round Raya and would have tapped in to an empty net if the ball had not run away.

Success came within a whisker of pulling a goal back when he got on to a deep cross, chested down and lashed in a shot from a tight angle. The ball was flying towards the roof of the net, but Raya got a hand to it, pushed it on to the crossbar and watched as it bounced away. Raya also saved as Stipe Perica tried to loft a shot over him as Brentford worked hard to ensure they had a clean sheet to go with their win.

There was still time or Emiliano Marcondes to shoot across the face of goal for The Bees and Maurizio Pochettino to shoot wide for Watford before the game came to a close. Watford’s defeat ended their quest to win the Championship title, but they are confirmed in second place. Brentford’s win ensured they will finish third and begin their Play-Off campaign away from home later this month. 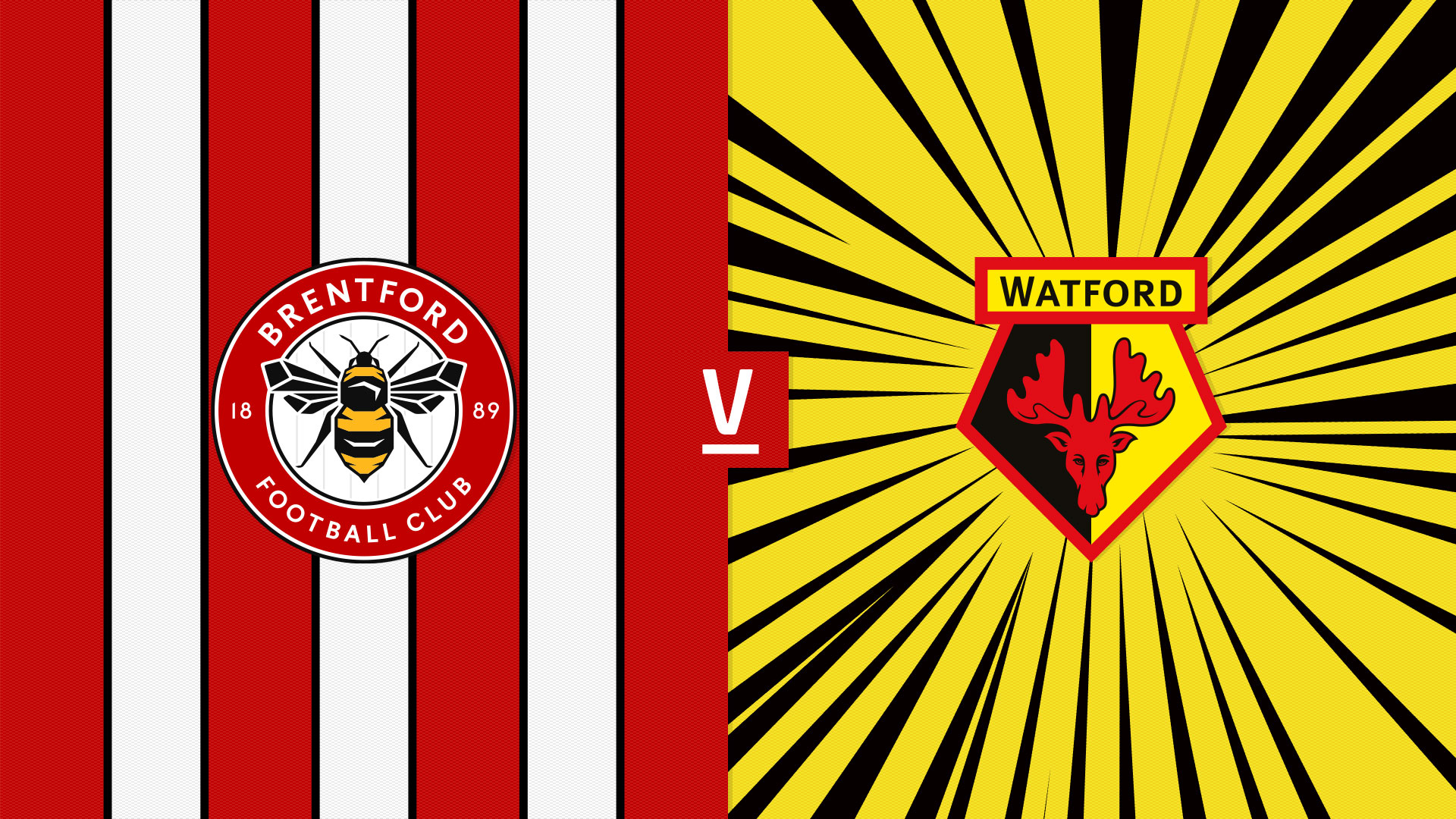 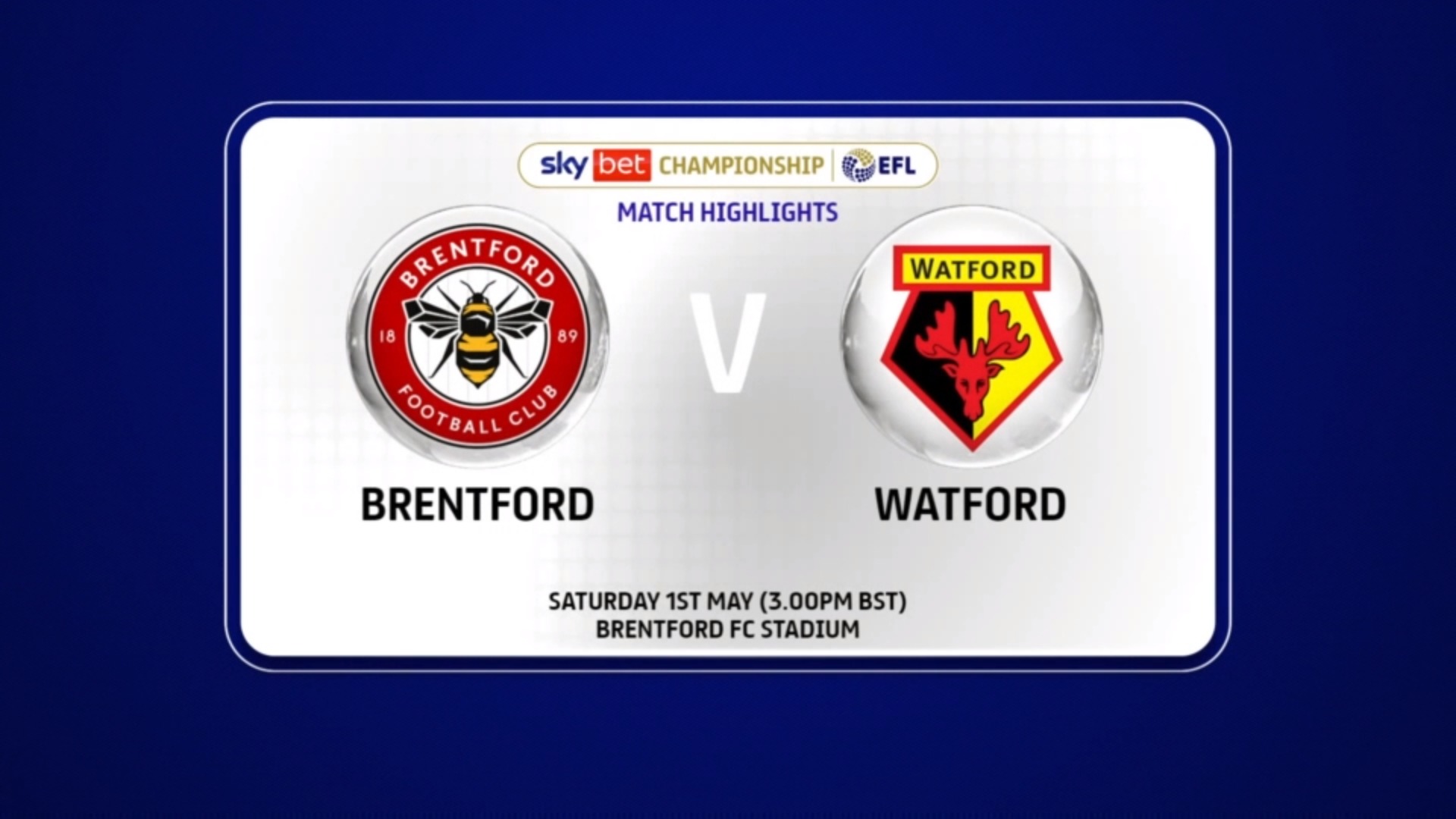 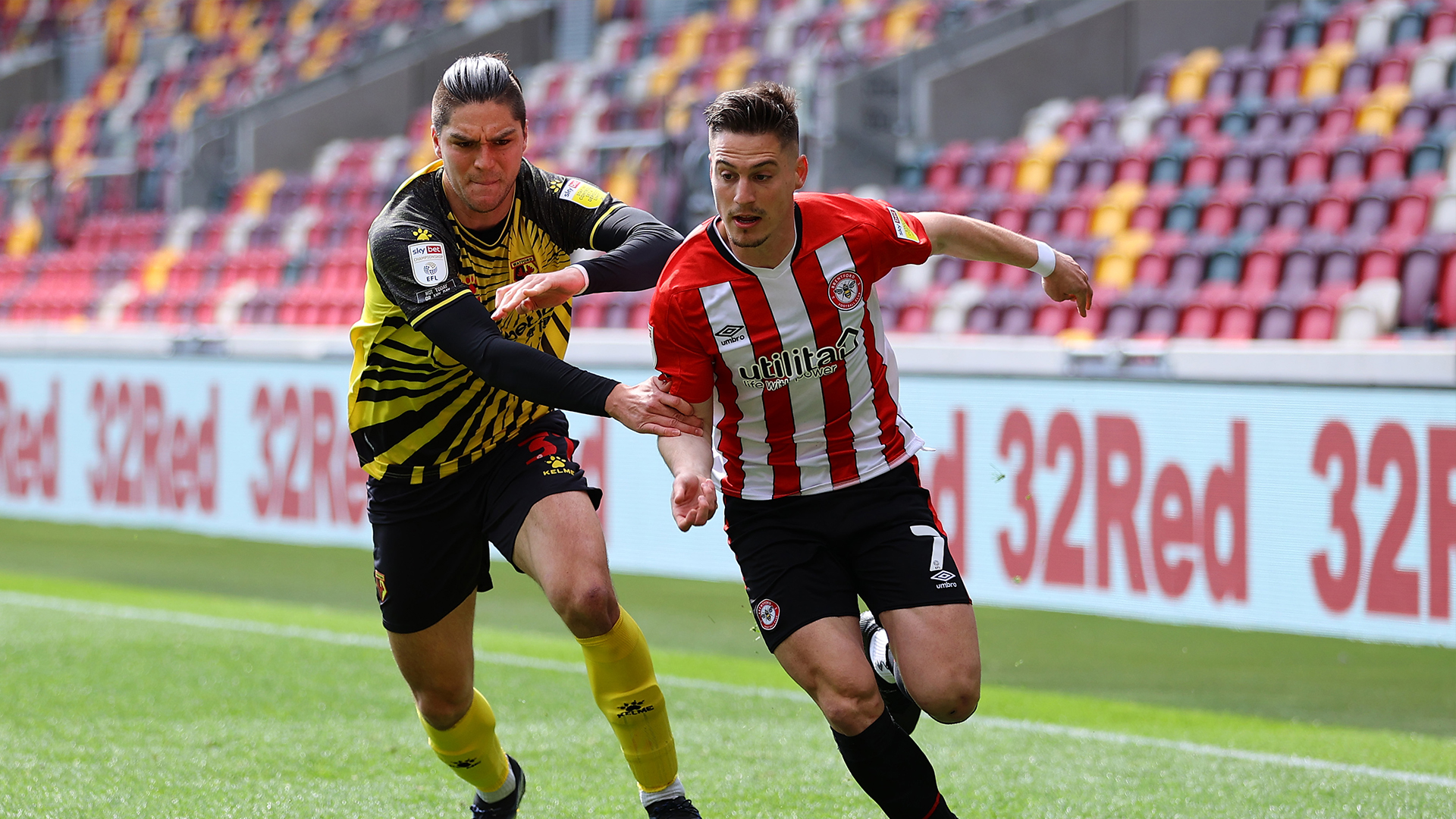