We look to follow up Friday's success on the road at Blackburn Rovers with victory at Derby County tonight. The Rams remain on the fringes of the relegation fight, without a win in five, under Wayne Rooney while we can move back into the top two with victory this evening. All the build-up to tonight's big game can be found below.

Derby County remain too close to the Sky Bet Championship relegation zone for comfort as we head into the final ten games of the campaign. They have a seven-point buffer over Rotherham United, who do, however, have four games in hand, but, more importantly, are four points clear of Birmingham City on the same games despite taking just two points from their last five.

It is perhaps surprising that under England's greatest ever goalscorer in Wayne Rooney their struggles have been in attack this term. They have scored just 25 goals in 36 matches and have failed to score in a joint-league high 18 games. Colin Kazim-Richards (7) is the only man in their squad with more than three goals to his name this season.

At the other end of the pitch, Rooney and his coaching team have turned The Rams into one of the division's meanest defenses. They've conceded the second fewest goals of any side outside the top ten (39), and have as many clean sheets (11) as us and Barnsley.

As you might expect with a side searching for that winning formula, Derby have used a league high 35 different players in their 36 games this season.

Their cause this season has not been helped by another serious knee-injury suffered by Krystian Bielik in January. Derby picked up 21 points in the 12 games he played around the turn of the year but have taken just 11 from the 10 they've played since then.

Christian Norgaard made his first start since October on Friday night while Pontus Jansson played 70 minutes for Brentford B on Saturday. Rico Henry (hamstring), Josh Dasilva (hip), Shandon Baptiste (knee), and Luka Racic (back) remain out.

Krystian Bielik (knee), Jordan Ibe (hamstring) and Curtis Davies (achilles) are Derby's long-term absentees. Tom Lawrence is set to return to the matchday squad tonight for the first time since he picked up an ankle injury in December while Lee Gregory (knee) is also fit to play.

A childhood prodigy who went on to become Manchester United and England's record goalscorer, Wayne Rooney's playing days are now at an end as he steps into the dugout at Pride Park. He retires having won 16 major trophies, including five Premier Leagues and a Champions League, at Manchester United as well as representing England at six major finals. England's most capped outfield player was voted the PFA Players' Player, PFA Fans' Player, Football Writers Association, and Premier League Player of the Year in 2009/10, finishing fifth in the Ballon D'Or voting in 2011. In total he scored 313 goals in 761 Club appearances to add to 53 goals in 120 England appearances.

⚖ David Webb will be the man in charge tonight

Tonight's game is available on iFollow Brentford as well as the Sky Sports Red Button.

For just £10 (£7 international fans) you can keep up with all the action live from Pride Park.

Season Ticket and Premium Seat Holders who froze their tickets have had their iFollow account upgraded to VIP for this fixture. This means you simply have to log-in to watch the game. To check you have been upgraded to VIP, login and head to ‘My iFollow Account’, select ‘Purchased Packages’, if you have been upgraded you will see a Brentford Season Ticket with an active status.

If you are having any issues with your VIP, get in touch with tickets@brentfordfc.com.

Next Up: Derby County

Brentford let a 2-0 half time lead slip as they drew 2-2 with Derby County. The Bees looked to be in complete command at the break, with a lead that could have been even greater than the one secured with goals scored by Ivan Toney and Sergi Canós. But Derby switched it up at the interval, scored immediately after the restart and then grabbed an equaliser with three minutes to go.

It was the archetypal game of two halves with Brentford dominant in the first period but pushed back after the break. They looked to have stemmed the tide after conceding soon after the interval but were unable to get over the line. Derby substitute Louie Sibley bent a shot in to the top corner from 18 yards to make it 2-2 and give his team a point.

Brentford made the perfect start, taking the lead eight minutes in. And once again it was Toney with the goal. The striker played his part in the build-up, albeit Derby were culpable. Andre Wisdom gave the ball away and Vitaly Janelt found Toney, the next pass appeared to be putting Bryan Mbeumo in on goal and he went down when Lee Buchanan clipped his heels. Referee David Webb pointed to the spot, and decided that was punishment enough, showing no card to the Derby man. Toney took the penalty, waited for Kelle Roos to dive to his left and rolled the ball in to the other corner to put The Bees in front.

The Bees would have been extremely happy with the opening to the game. As well as the lead, they had complete command of the contest and were playing in the way they wanted. The visitors dominated possession and picked their moments to launch attacks, waiting to pull Derby out of position and move the ball forward.

Brentford spent large parts of the first quarter of the game with the ball in their own half, but they also created a series of chances and could have been out of sight early in the contest. A great pass from Canós released Jensen in behind, he drew Buchanan and slipped the ball to Mbeumo arriving on his right. Mbeumo measured his shot and beat Roos but placed it just the wrong side of the post. One pass cut Derby open and Mbeumo seemed set to score from ten yards but was unable to hit the target.

Another spell of patient possession soon after ended with Mbeumo cutting inside and freeing Canós on the left, he exchanged passes with Mads Bech Sørensen before letting fly with a shot that deflected wide. Derby dealt with the first ball in, and a defender blocked a shot from Canós that fizzed back towards the target. Jensen then delivered a deep cross that Toney volleyed across, Roos tipped it away and Mbeumo’s shot deflected wide. The next corner was met by Pontus Jansson, but not with enough power to trouble Roos.

Brentford were increasing their threat and grabbed the second goal at the midway point of the first half. As Derby attacked, Brentford won the ball and Mbeumo got on to a Toney lay off from a Jensen pass, flicking the ball away from Wisdom and releasing Canós on the left. He teased Nathan Byrne before cutting inside the right back and drilling a shot low past the right hand of Roos. The Jensen pass, Toney touch and Mbeumo turn set up a four-on-two attack and Canós ruthlessly made it count.

Buchanan had a shot deflected wide for the home side and there was a small spell when they won a few corners and looked like they might be able to put The Bees under pressure. But that was an isolation portion of the game and Brentford maintained command. Time and again they worked the ball down the flanks, looking for a cross or final pass to turn good possession in to a third goal. The closest they came before the interval was when Jensen darted in to space on the right and delivered a cross that Toney would have finished off but for the intervention of Wisdom.

Derby could not allow the game to continue in the same way after the break and made a triple half time substitution. They changed their shape, moving to a back three and bringing on Lee Gregory to partner Colin Kazim-Richards in attack. They were more aggressive without the ball and seemed to have moved up a couple of gears.

And the home side pulled a goal back within seconds of the restart. Jason Knight burst through a challenge in midfield and, with Mr Webb playing advantage, the ball was worked to Nathan Byrne on the right. He had the time to measure a cross and played it low and hard for Gregory to tap in. The ball was put on a plate for the substitute and Derby were back in the game.

The goal and the changes gave the game a different complexion. The hosts were invigorated, pressing higher up the pitch when they did not have the ball and stopping The Bees building play as they did in the first half. They also created chances with Graeme Shinnie firing over from distance before a Kazim-Richards shot was blocked.

Canós and Jensen created an opening for Mbeumo at the other end as he cut in off the right and fired in a shot that Roos saved low. But most of the action was now at the other end, with Derby taking control of the midfield area and spreading the play to both sides. Byrne and Buchanan were high up the pitch and Kazim-Richards had support in attack, which meant defensive challenges for The Bees.

Brentford were also creating openings as the game started to stretch. Canós had a shot blocked from a half cleared long throw and Derby went straight on the attack. Gregory broke down the left and had a shot that was blocked by Janelt. The corner was swung underneath the crossbar and Brentford failed to get it away, it eventually dropped to Gregory, but Raya made himself big and kept the shot out.

Sibley ran from deep soon after, but his shot hit Gregory. Knight then lashed over from distance, but the game had entered a lull. Brentford introduced Tariqe Fosu and Saman Ghoddos to give them fresh legs and Derby’s attacking threat lessened. Fosu and Ghoddos looked as if they had set up a match clinching goal for Toney, but as he prepared to shoot from 18 yards, Wisdom made a fine block.

Raya saved a fizzing shot from Knight, but Derby were mostly playing in front of The Bees, until Sibley conjured something. Brentford failed to deal with a free kick and on the third phase, Sibley found some space, turned quickly and bent a shot past Raya and in to the top corner. The shot was unstoppable and Derby had a point.

There were still a few minutes left for either team to grab a winner, but Derby seemed content, moving in to a more defensive shape. Gregor exchanged passes with Sibley and shot over and Raya saved from Tom Lawrence while Brentford were unable to put together any attacking possession. They put a couple of long throws in to the box without success and had to settle for a point.

Next Up: Derby County 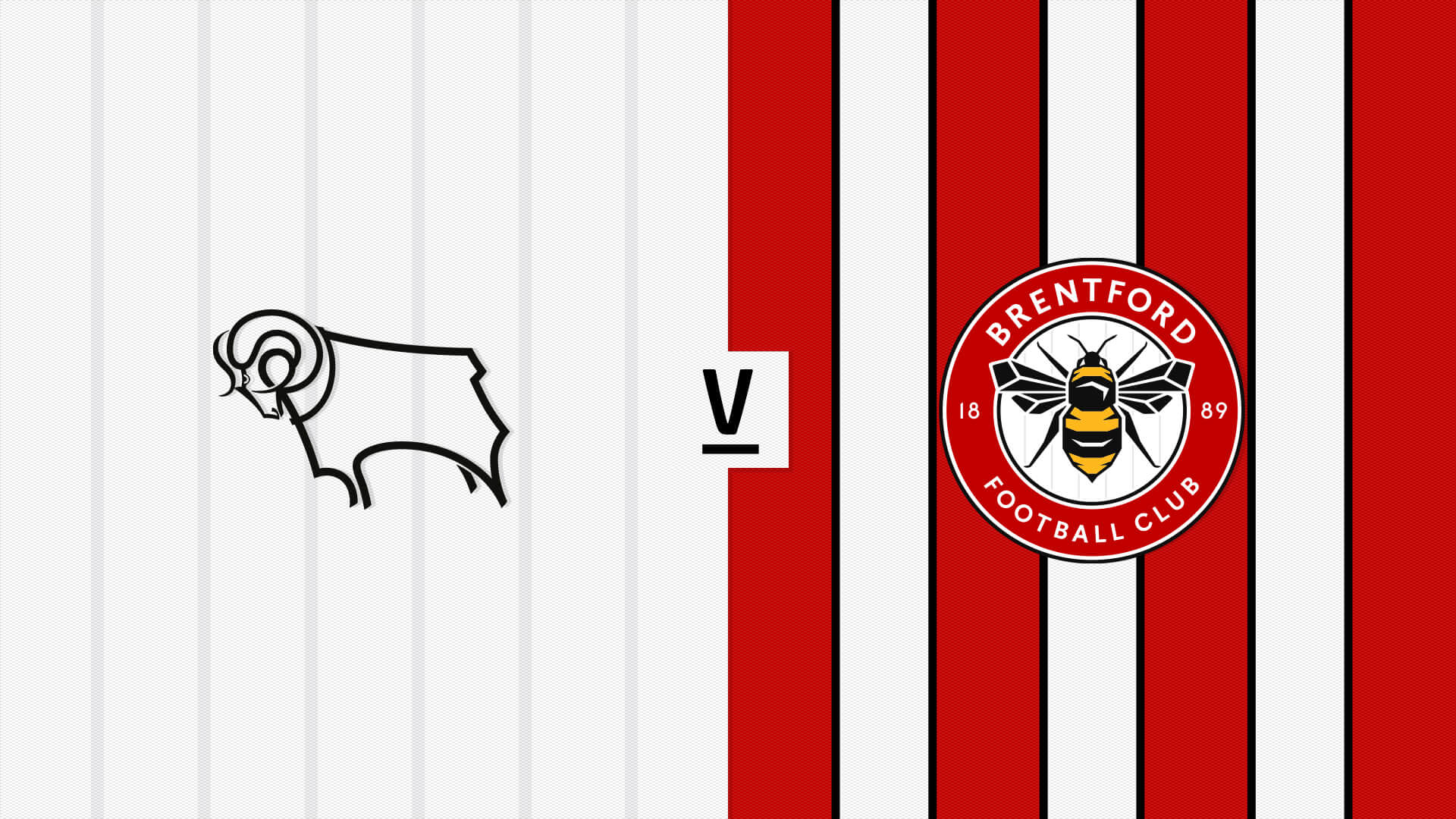 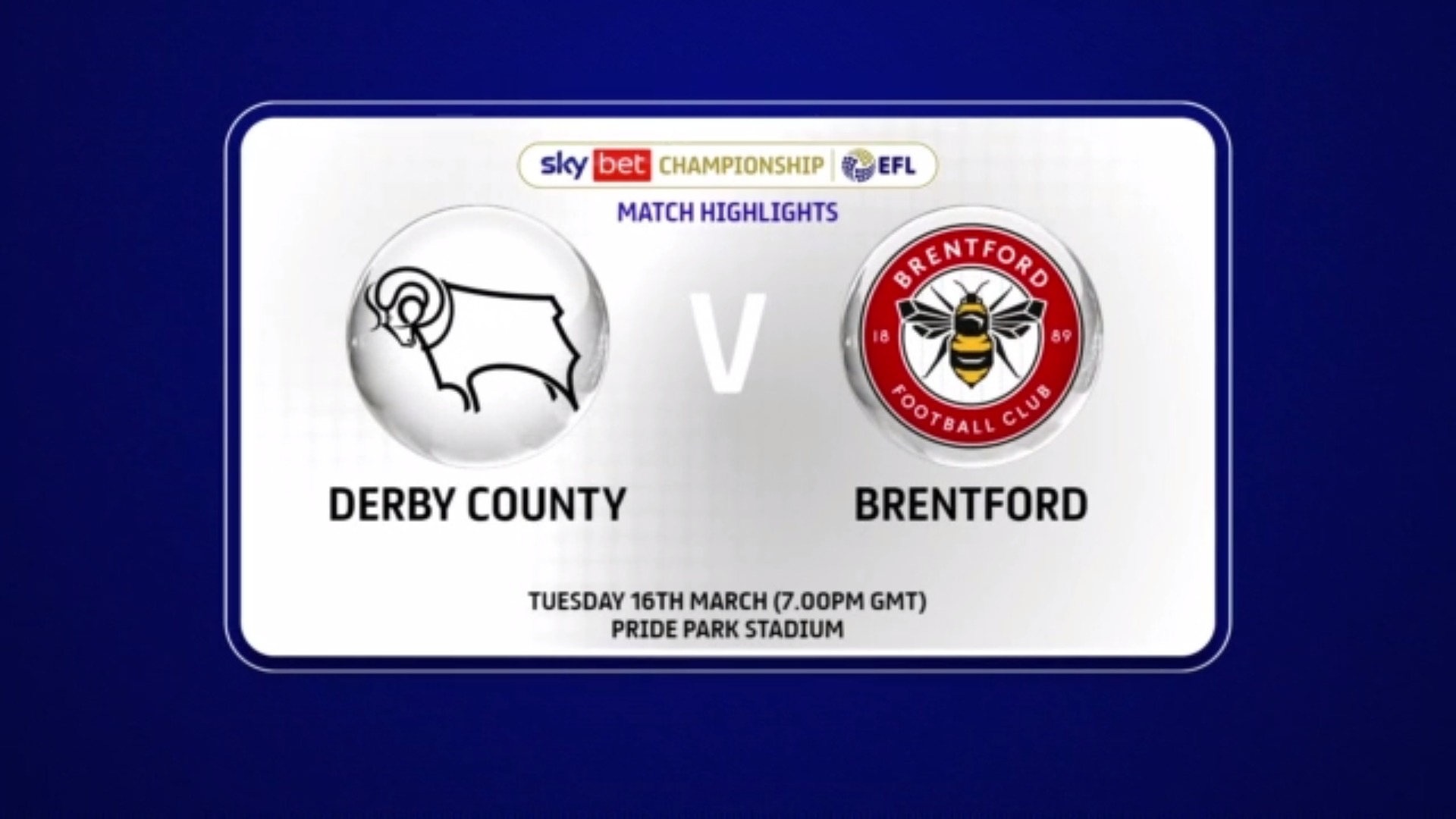 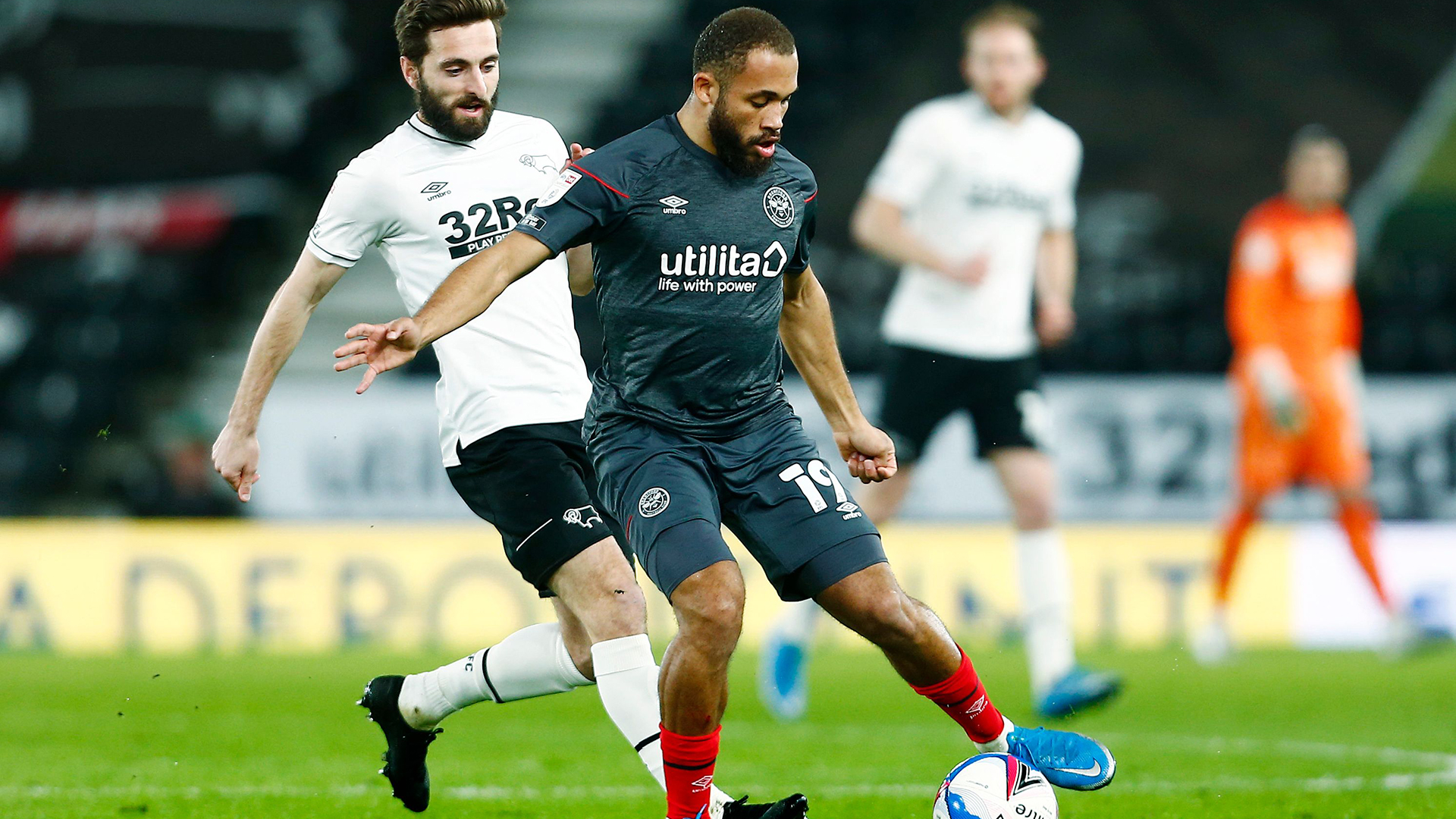