A Friday night under the lights in Lancashire awaits us this evening as we return from a nine-day break without a game. In that time, Blackburn Rovers have ended a run of six defeats in seven with a win at Millwall and their midweek draw at home to Swansea City. All the info ahead of tonight's clash can be found below.

A season that promised so much for Blackburn Rovers looks set to be derailed by a crippling injury-list which has seen Tony Mowbray's side drop from Play-Off chasers into mid-table.

When Rovers beat Luton Town 1-0 in late January they stood eighth in the table, just three points outside the Play-Off places, having taken 28 points from their previous 15 league matches.

With a host of key players missing, they then took just one point from a possible 21 before this week's victory at Millwall and midweek draw at home to Swansea City lifted them back up to 14th.

Tony Mowbray may well point to the small margins going against Rovers. Their last 11 defeats have all come by just one goal and they have the best goal difference outside the top eight.

With 49 goals to their name, only four sides, including Brentford, have scored more than them, but, with 40 goals against, only Bristol City (48) of the sides above them have conceded more goals.

Behind Adam Armstrong (19), who will miss out tonight due to injury, Ben Brereton is their next top scorer with five goals. Highly-rated Liverpool loanee Harvey Elliott (above) has been their creator in chief this season with nine assists, putting him behind only Emi Buendia in the divisional charts.

Pontus Jansson is closing in on a return from an ankle injury while Christian Norgaard and Emiliano Marcondes both played 80 minutes for Brentford B on Sunday. Charlie Goode came through the full 90 in that same game but Rico Henry (hamstring), Josh Dasilva (hip), Shandon Baptiste (knee), and Luka Racic (back) remain sidelined.

Bradley Johnson (hamstring), Bradley Dack (knee), Tom Trybull (back), Corry Evans (fractured skull) and Joe Rankin-Costello (hamstring) have all returned to bolster Mowbray's ranks in recent weeks and the Rovers boss revealed yesterday that he may also have Lewis Holtby (knee) and Jarrad Branthwaite (illness) back tonight as well. Top scorer Adam Armstrong is out with a tendon issue as are Scott Wharton (achilles), Jacob Davenport, and Daniel Ayala (both groin).

Tony Mowbray passed 200 games and four years in charge at Blackburn Rovers last month, with a win percentage of more than 41 during his time in Lancashire so far.

A distinguished defender in his playing days for Middlesbrough, Celtic, and Ipswich Town, Mowbray was handed his first managerial job at Hibernian in 2004. In October 2006, Mowbray was appointed Manager of West Bromwich Albion. He led The Baggies to the Championship title in his second season at The Hawthorns.

Celtic came calling in June 2009, before Mowbray returned to former club Middlesbrough in October 2010. Mowbray left Boro in October 2013 and took charge of Coventry City from March 2015 to September 2016.

Under his managerment, Blackburn secured an immediate return to the Championship as runners-up following relegation in 2016/17, finishing 15th and 11th in their two seasons back in the second tier.

⚖ Geoff Eltringham will be the man in charge tomorrow

Friday's game is live on Sky Sports. It can only be watched on that platform. See more here. iFollow Brentford coverage will be audio only

Next Up: Blackburn Rovers

A first half penalty from Ivan Toney was enough to give Brentford three points on their travels on a wet and wild night against Blackburn Rovers. The Bees had the better of a first half that was short of action and Toney put them in front from the spot. A Blackburn side that made a series of substitutions posed more of a threat in the second half, but The Bees did enough to get over the line and take a 1-0 win.

It was a win that Brentford deserved, but one they had to work very hard for. They could have been more than a goal up at the break, but the first half was mostly played in the middle third. The second was more open with Blackburn introducing attacking players and pushing forward but the hosts could not breach Brentford’s well-drilled defence and The Bees took the points.

The first quarter of the contest was played mostly at the pace Brentford wanted, particularly after they took an early lead. The only attempt on goal in the first 30 minutes was the penalty that Toney stroked home and there was little action in either penalty area. The game was largely played in the centre of the pitch with Brentford seeing a lot of the ball and content to invite Blackburn to chase it, on a pitch that made passing football difficult.

An early chance for Vitaly Janelt to play Bryan Mbeumo in to space was wasted as the pass was heavy but The Bees showed signs that when they could get in behind the home midfield, they could profit. Mbeumo and Tariqe Fosu pushed the home full backs in to defensive areas and Janelt saw a lot of the ball. With Christian Nørgaard playing as the deepest member of the midfield three, Janelt was able to push forward and looked to get close to Toney.

The goal came when Brentford won the ball and got in behind the Blackburn midfield. Toney had space and fed Fosu on the left. Fosu jinked one way and then the next and as he went to shoot, he was clipped by Darragh Lenihan. Referee Geoff Eltringham pointed to the spot and Toney took the responsibility. He waited for Thomas Kaminski to commit himself, diving right, and stroked the ball in to the other corner to open the scoring.

And that was the way it remained until half time, with little else to report. Blackburn tried to push forward but got no joy from a well-organised Brentford defence, protected by Nørgaard, patrolling the midfield area. They only had one shot on goal in the first half when a long ball forward found Sam Gallagher, pulled in off the left. He got to the ball as Winston Reid misjudged it but the shot from 18 yards, under pressure from Henrik Dalsgaard, flew wide.

Brentford were slightly more incisive with the ball, but a hard-working Blackburn midfield kept the game tight. Only when The Bees were able to get the ball behind them did they pose a threat. Toney flicked a long ball in to the path of Janelt, but he pulled a shot wide as he approached the penalty area. Mathias Jensen also shot wide when a long throw was half cleared but it was a largely forgettable first period, apart from the Toney goal.

Blackburn changed shape and personnel at the break, looking to make it a different contest in the second half. Joe Rothwell and Harvey Elliott were introduced to play as part of an attacking midfield trio with Bradley Dack with Gallagher and Ben Brereton withdrawn. Lewis Travis followed soon after for the home side, albeit he only lasted eight minutes, and there was immediately more pace in the game with Blackburn running with the ball and driving at The Bees.

A run from Rothwell could have created a chance for Elliott but David Raya rushed out to save as the Blackburn man tried to get on the ball inside the penalty area. Rothwell then found Dack inside the penalty area and he turned in to space before pulling a shot across Raya but just wide of the far post. As the rain poured down, Tyrhys Dolan then tested Raya from distance with a shot that the Brentford goalkeeper was able to gather before Rothwell did likewise with a low effort.

The home side had committed to a more open contest and it was definitely more entertaining. Brentford were being pushed back, playing in to a strong wind and driving rain, but they also had chances to counter-attack. Toney almost scored a remarkable goal when he spotted Kaminski off his line and took a quick free kick from 50 yards. The ball floated over Kaminski and landed on top of the net, a foot from being a perfect and memorable second goal.

A run from deep by Dalsgaard set up a chance for The Bees. Jensen delivered a deep cross that Fosu retrieved. He was unable to get a shot away, but the ball broke to Mbeumo and his effort was blocked. A Mbeumo corner then almost created a goal as Ethan Pinnock met it but was unable to get enough purchase to put it in. As the ball dropped Toney was lurking but the ball rolled free and Blackburn cleared.

Blackburn were putting more men forward as the game entered the later stages and were pressing for a leveller. They worked an opportunity on the right and the ball flew across, Elliott was unable to turn inside the penalty area and get a shot off and when the ball dropped to Rothwell, Dalsgaard was able to make a block and Raya saved. A cross from the left almost created a chance for Ryan Nyambe, but he was unable to get the right contact under pressure from Mads Bech Sørensen. Elliott drilled the ball back cross and Dack couldn’t divert a header home.

Mbeumo played Toney in to space at the other end, but the shot was dragged wide. Sergi Canós then fired in a long range shot that dipped and swerved and forced Kaminski to turn it away to his left. Barry Douglas inexplicably tried to play the ball back to his goalkeeper with Emiliano Marcondes lurking. Marcondes made the challenge and Blackburn were fortunate to see the ball loop away to safety.

Reid made a great block from an Elliott shot but The Bees had a great chance to seal the game at the other end. Blackburn dealt with a corner only for Saman Ghoddos to send the ball back in and find Reid, but he could not direct his effort. Toney picked up the loose ball and crossed, Pinnock knocked it back across and Marcus Forss headed it towards goal, only for Kaminski to make himself big and produce a fine save.

Raya saved a Lenihan header late on, but the later stages were marred by a serious looking injury to Dack. The Blackburn man came from behind Raya as the Brentford goalkeeper went to kick the ball downfield and then crumpled in a heap as the players came together. Mr Eltringham waved away appeals that a foul had been committed but Dack was withdrawn on a stretcher after lengthy treatment. The second half ticked on in to the 55th minute but The Bees saw it out and got the win.

Next Up: Blackburn Rovers 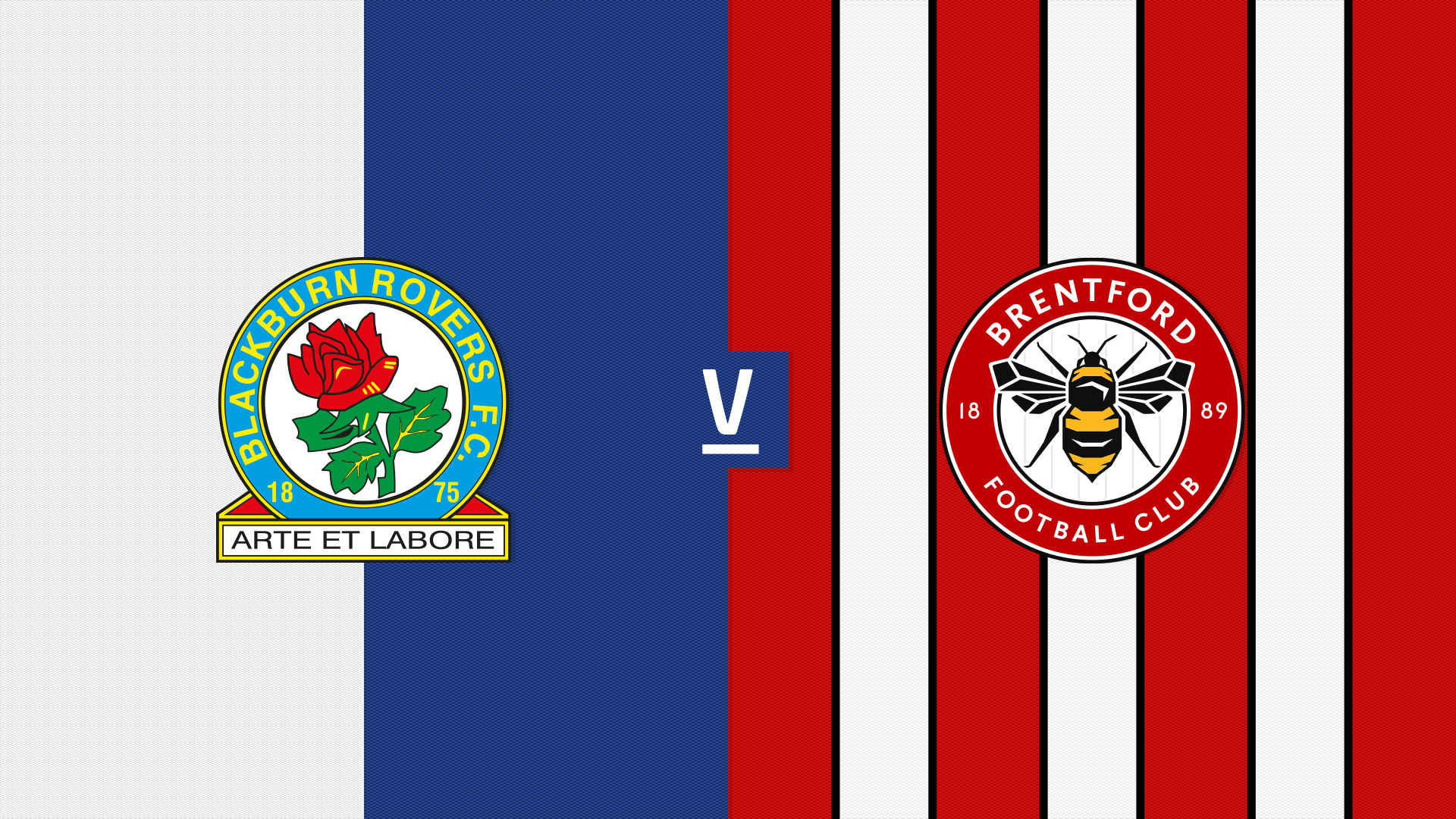 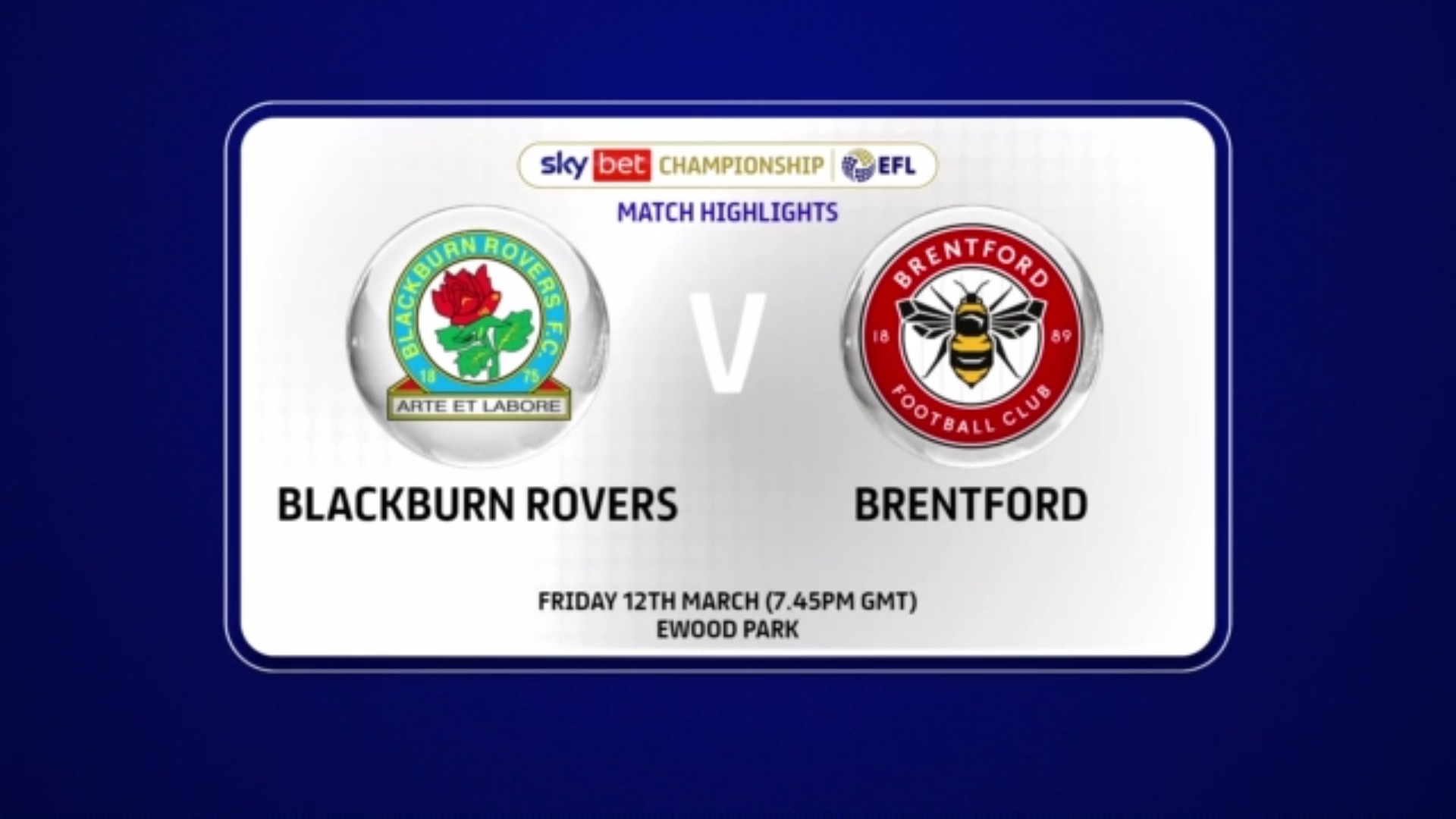 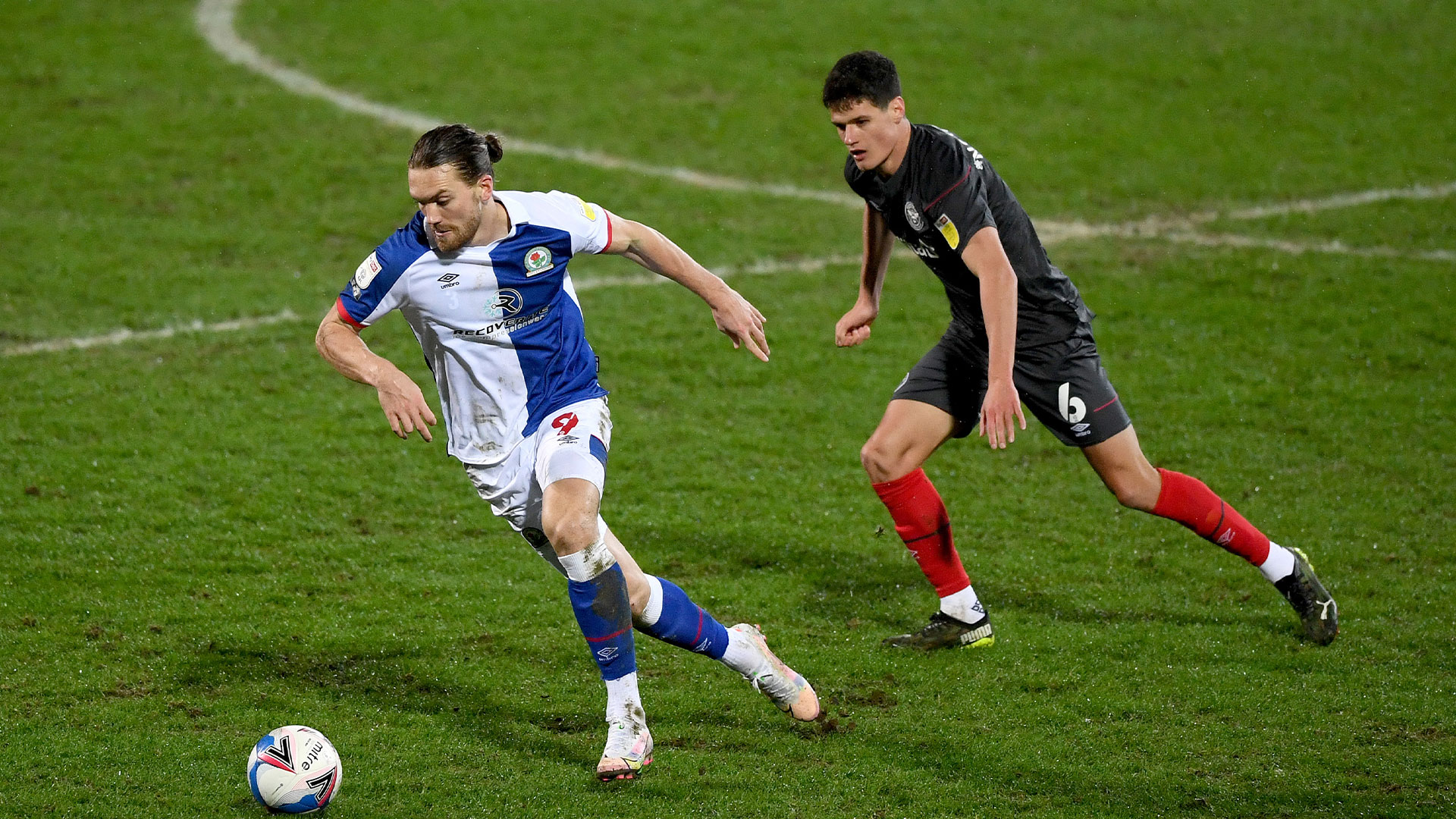